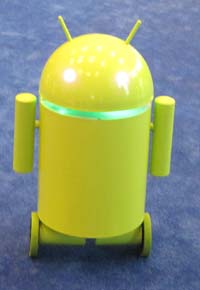 The iconic Google Android comes to life, with a two wheeled balancing robot, that looks and feels like a real android. It seemed fitting for him to be a balancing robot, because although he has legs, he never uses them, just floats around.

No Android is complete without the his own Android App, to control him. The app. allows him to be driven around, speak, play music streamed from the phone or tablet, change the color of the lighting in his head, and turn his head from side to side. He also responds to a variety of voice commands using Google Cloud services. The app. was created using the Google App Inventor Beta, and runs on both Android phones, as well as the Samsung Galaxy Tab.

The “Bug Droid” as we affectionately call him, made his first appearances at Google IO 2011, and Maker Faire 2011.