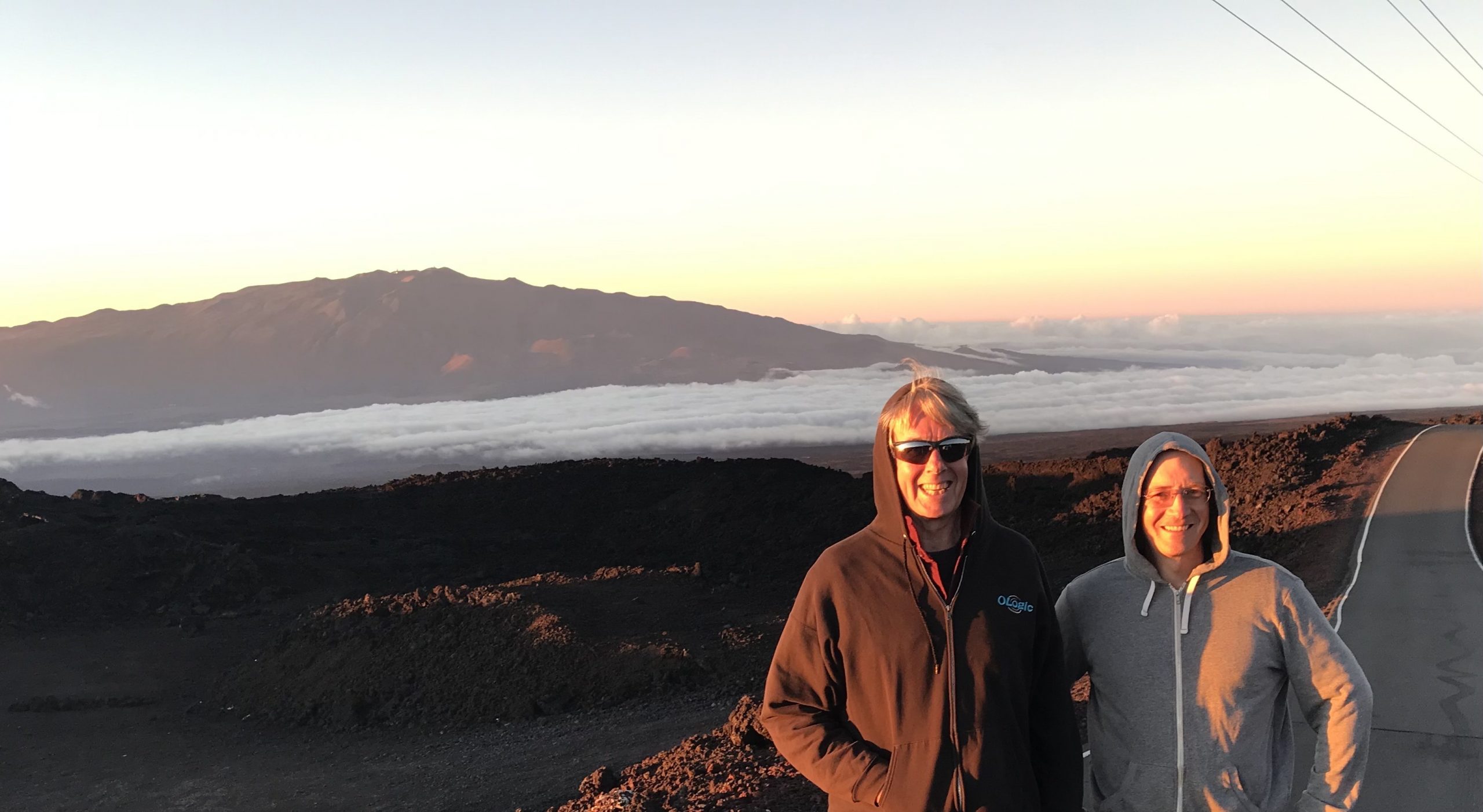 Bob Conn (left) pictured with Brandon Blodget (right) 11,000 feet up Mauna Loa with Mauna Kea in the background at sunset.

Bob Conn – Man of Many Talents

A Silicon Valley Pioneer with over 50 years of Engineering experience, owner of 85 patents – Bob Conn is also a competitive rower, an aviator and a house builder.

Bob Conn has been an engineer with OLogic for over 7 years. Specializing in schematic and PCB design, his favorite part about being an engineer is that it is “clean” and it is logically sensible. He likes how there is not really much to disagree about and how it is endlessly fun. He loves that the culture at OLogic is overt and as one of the older guys in the office, he provides some future stability. When asked to describe OLogic in 3 words, Bob said “integrity, fun, and premier (as in the premier source for electronics for robots)”.

“Take one more step. Learn how to maximize your mistakes per hour.”

We thought Bob Conn’s personal mantra needed some clarification, so we asked him to elaborate. The “Take one more step” in part stems from a trip to the top of Mt. Whitney, a 14,000 ft peak in CA. There was 3 feet of snow on the ground and he had painstakingly made it to 13,000 ft. but felt like he had depleted his energy. About to give up, instead, Bob decided to take just one more step and then he would go back, then another, then another…until he surprised himself and made it to the summit. Success! When applied to almost any aspect of life, this advice can push us forward, “confronting what is in front of you, if you can do one small piece, you can do it again”, he mused.

“Learn how to maximize your mistakes per hour.” – Hmm!? It’s really about how fast you can recover from a mistake. In his early days in engineering, it was all about fixing mistakes.He would create a working environment where you could quickly correct your mistakes and be more productive. For example, writing open-ended “C” code on a (new at the time)  mini computer often crashed it. Then it took an hour to reboot it. You were limited to 1 mistake per hour. Then IBM PCs showed up and you could reboot in 1 minute. Now we can make dozens of mistakes an hour. More mistakes, more progress!

Reflecting back on his time as a student at Berkeley, Bob Conn spoke of his many wonderful experiences: The underground mine under the Hearst Mining building (his engineering professor grandfather would take him there when he was a kid), the Unibomber was his calculus professor, he remembers being tear gassed and how his girlfriend was put in jail during the protests. Also, other Berkeley quirky aspects such as: music that never existed before, the sexual revolution, psychedelic drugs, and one of the best sunset views in the world. He also was introduced to world class engineering, being part of the first year of SPICE kids (which is Berkeley’s Circuit Simulation Program), working at the Space Sciences Lab above the Berkeley campus and looking at the first satellite data from early satellites, and learning electronics from the primary university feeding Silicon Valley with engineers. His main takeaway from Berkeley is there is no shortage of interesting stuff out there.

Bob’s engineering career started when he was at National Semiconductor. They used 2” wafers. His first chip had 3 transistors and 3 resistors – a differential amp. Back then, they had only one engineering building and there were only about 1000 chip design engineers in the entire world, and he was one of them. Forty years later at Xilinx he was part of the team that made chips with a billion transistors on 12” wafers – and there were a lot more design engineers in the world.

Reflecting back on his time at National, Bob remembers, “Slide rules and calculators, nothing but printed literature. Want a data sheet? You better have a recent copy of the data book. Or you make a phone call and have them mail you the latest data book. Want to draw a schematic? Sharpen your pencils, get a clean sheet of paper, and start drawing.”

In the next phase of his career, Bob Conn began working at Fairchild, where he helped develop the first 4k bit DRAM. He went on to become the engineer in charge of the assembly and testing of the 2 chips that were the electronic locks on all the nuclear weapons the US had. There was more paperwork for those two chips than on Fairchild’s entire MOS product line.

After departing from Fairchild, Bob Conn went on and founded Connsult and was there for about 15 years. While he was there he wanted to develop his engineering skills by accepting pretty much every engineering project that came in the door. It ended up paying off as over the course of his time there, he got to work on many great projects such as the Voyager, which was the first plane to make it around the world on one tank of gas. He designed and built the flight recorder for the Voyager, which was built to record the altitude and more importantly, the airspeed of the plane during the full flight in order to prove that the plane actually did go around the whole world without stopping. No other flight recorder existed at the time that could go for more than 3 days, and the flight was planned to be as long as 12 days.

Also at Connsult, he wrote, in C, an early PCB auto-router that was way faster than anything else for a few years. Bob compares the chip shortages of today with similar part shortages back then: they happened more often, but luckily recovered faster. 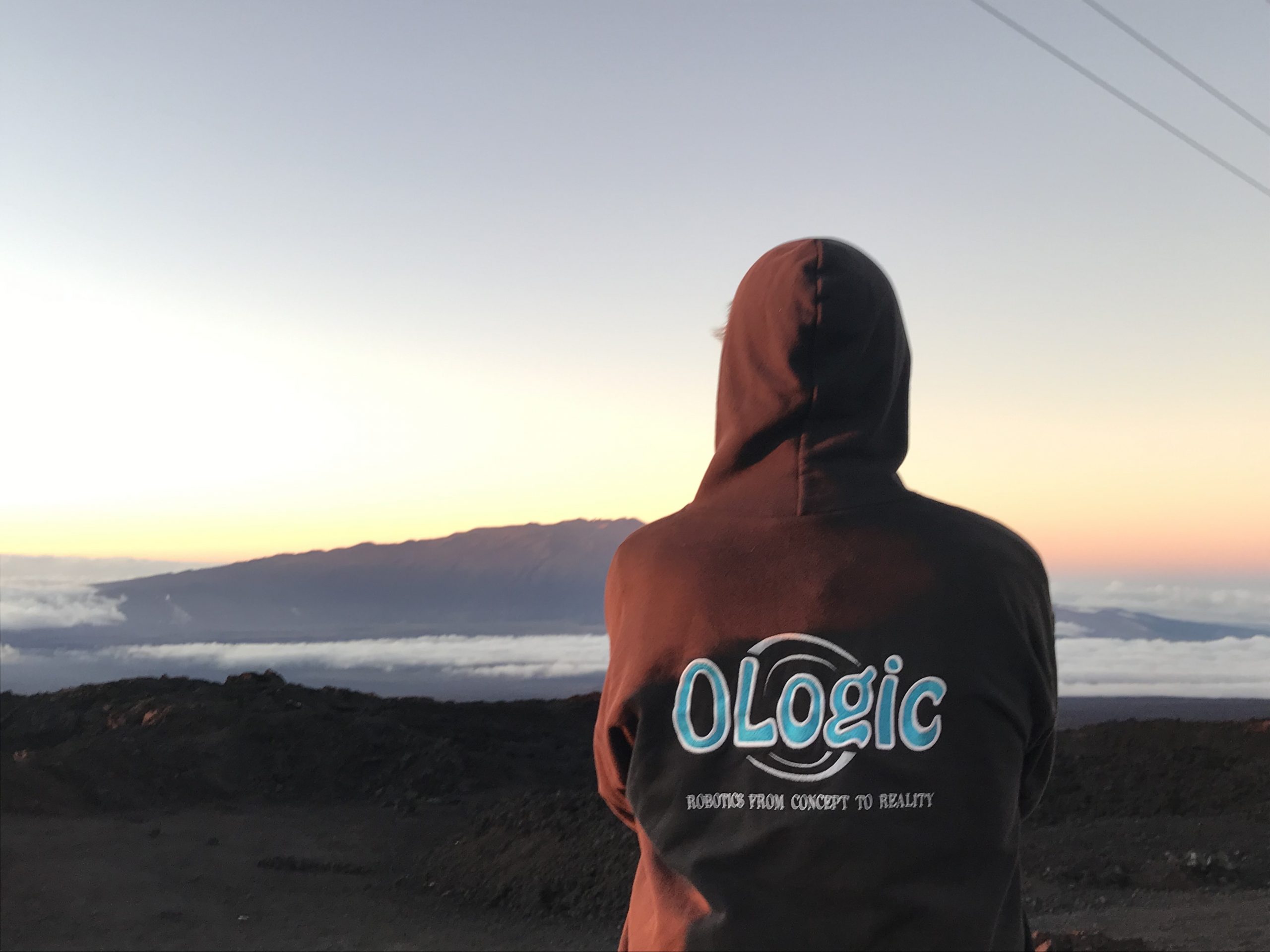 Following Connsult, Bob spent about 15 years at Xilinx, where it was all about innovation and moving fast in chip design. He developed the testing process for FPGA performance and received a number of patents – and trade secret awards for his work. Some years later, but as a direct result of that work, Ted Larson, OLogic founder, bought Bob a steak dinner for using an FPGA to measure picosecond timing in a LIDAR design. Xilinx is home to about 70 of his 85 patents. At the time, companies were engaged in patent infringement wars, so whoever had the biggest pile of patents generally was the winner. For a while he had his favorite patent attorney, Lester, visit every Thursday afternoon and they’d do another patent. “Great fun, but boring after a while.”

Another OLogic employee, Brandon Blodget, was his cubicle neighbor, and was the person who eventually became the connection between Bob and OLogic.

Bob was also CTO for a startup – SixiS – in North Carolina about 10 or 12 years ago. High Performance Computing using arrays of FPGA bare die on silicon circuit boards. DARPA, NSA, NRL, etc. “It was very interesting”.

Bob hasn’t always lived in Silicon Valley. He was born in Portugal and grew up on various islands in the Pacific. He went to elementary school in Hawaii, where he spent a good amount of his childhood on O’ahu on Lanikai beach. He couldn’t seem to stay away from Hawaii, which prompted his move back and the opening of our OLogic Hilo office.

Aside from being an engineer, Bob is also an avid rower. In fact he started rowing while at Berkeley, which has a world class olympic rowing program. After taking a little break (35 years) from competitive rowing at Berkeley, he got back into it – actually, he says it was because he was getting fat. At first it was just for fun and exercise, they even came in last place in their first race. But he remembered his mantra, and took one step forward – or one more stroke – and eventually, through rigorous training, he and his crew became good enough to bring home gold medals in World competitions racing against ex-olympians. “Winning was secondary. It was all about training and rowing the best possible race we could. That it brought home gold medals was a bonus.”

Something that Bob has always wanted to do is row across the Atlantic ocean. He almost did, and sent in his registration fee, but his partner decided to get married instead. Bob said, “if I can figure out how to get really healthy again, and under the right circumstances, I’d try it. My old partner has been married long enough.”

Bob is also an aviator and architect.

As for being an aviator, he learned to fly with his dad and soloed in sailplanes at 16 years old, and has logged over 350 flight hours in power planes. He also built a Long EZ airplane – which connected him to the Voyager flight and to building the flight recorder..

He did all of the design, drawings, and a substantial amount of the construction for 2 houses, one in the Santa Cruz mountains and one in Hakalau, HI on the Big Island.

At 28 years old he drew up the plans for the 4000 sq ft. California house, himself – in ink – a skill he learned while working at the Space Sciences Lab at Berkeley. This caused a little surprise at the building department as they had never seen plans drawn in ink before. Then he swung a hammer for 9 months with his buddy before he went back to work in “the Valley”.

At 60 years old he drew up plans for his house in Hakalau using the 2D graphics editor, Visio. “It’s a lot easier to erase than ink,” he laughs.

He has learned many important lessons over the course of his years in the industry and has seen firsthand the technological advances we have made as a society. Two major advances that have stuck out to him are:

Bob is a man of many talents, and we are lucky to have him as part of the team at OLogic!

See some of our other Employee Spotlight features and Blog Posts on our OLogic blog!